Minael is a main character in the series Mahou Shoujo Ikusei Keikaku. The elder of the "Peaky Angels" twins. Protruding out of her back is a single feathered white wing, and there is also a halo above her head. Mina and her sister, Yuna, have very similar personalities to the point where they are almost indistinguishable from each other. They can be rude at times, but mostly act innocent. Minael's magic allows her to transform into any non-living object. The object's size, shape, and weight don't matter. Minael's shapeshifting will change her to match the objects. Her magical cloak can erase appearance and smell. However, sound and heart movement are ineffaceable. She likes light snacks. 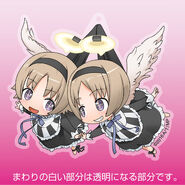 Add a photo to this gallery
Retrieved from "https://yuripedia.fandom.com/wiki/Minael_/_Mina_Amasato?oldid=33327"
Community content is available under CC-BY-SA unless otherwise noted.