Misuzu Moritani/Mirei Moriya is the protagonist of the yuri manga Fragtime. An introvert and shy student whose using her unusual ability to stop time for three minutes a day to observe the people around her, she started being able to stop time in elementary school,

is making her feel insecure that she started to cry. 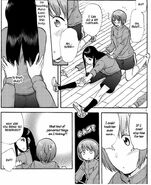 Add a photo to this gallery
Retrieved from "https://yuripedia.fandom.com/wiki/Misuzu_Moritani?oldid=32289"
Community content is available under CC-BY-SA unless otherwise noted.