Miwa is the protagonist of the story Nowhere to Go in Yuri Shimai. A dependable, friendly and smart girl who became Moriya's roommate at the dormitory. Since she and her are in separate classes, they rarely speak to each other at school. Once in a while, they pass each other in the hallway. 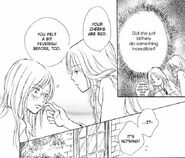 Add a photo to this gallery
Retrieved from "https://yuripedia.fandom.com/wiki/Miwa?oldid=33362"
Community content is available under CC-BY-SA unless otherwise noted.