Mune Ōmune is a main character from the yuri series Scorching Ping Pong Girls. The vice-captain of the table tennis club. As a player, she has brutal offensive power but her heavyset frame makes her run out of steam quickly when she's forced on the defensive. 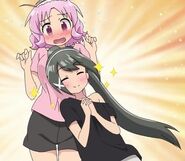 Add a photo to this gallery
Retrieved from "https://yuripedia.fandom.com/wiki/Mune_%C5%8Cmune?oldid=33394"
Community content is available under CC-BY-SA unless otherwise noted.