Nanoha Takamachi is the protagonist of the non-yuri series Mahou Shoujo Lyrical Nanoha. she is an innocent and kind girl who answered a call of help from an injured ferret,who was tracking down a monster in order to collect its jewel seed. Nanoha volunteers to help to acquires the Raising Heart—making her a magical girl. 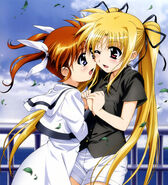 Add a photo to this gallery
Retrieved from "https://yuripedia.fandom.com/wiki/Nanoha_Takamachi?oldid=32307"
Community content is available under CC-BY-SA unless otherwise noted.