Nao Midorikawa is a main character in Smile! Precure! Of the series "Pretty Cure". A protective and athlete girl with a strong sense of justice, and has no tolerance for wrongdoers. She loves cute things. 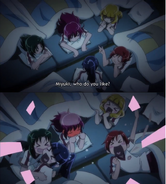 Add a photo to this gallery
Retrieved from "https://yuripedia.fandom.com/wiki/Nao_Midorikawa/Cure_March?oldid=50600"
Community content is available under CC-BY-SA unless otherwise noted.