Natsuki Kruger is a main character in the series Mai OtomeHIME. The 2nd of the Five Columns, and the headmistress of Garderobe. She also has a habit of flicking her hair with her right hand. She has a tendency to become irritated easily. Natsuki's Gem is the Ice Silver Crystal. 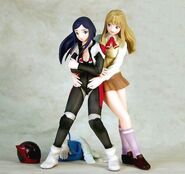 Add a photo to this gallery
Retrieved from "https://yuripedia.fandom.com/wiki/Natsuki_Kruger?oldid=33471"
Community content is available under CC-BY-SA unless otherwise noted.