Noire is a character in the Neptunia series and the CPU (Goddess) of Lastation. As the Neptunia series has many dimensions (Hyperdimension, Ultradimension, etc...) that the games take place in, there are many Noires in the series with varying, but similar personalities. Most Noires are the older sister of Uni and a rival and friend of Neptune. (Although she often denies the friend part) 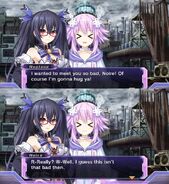 Noire thinks Neptune can't do anything without her. 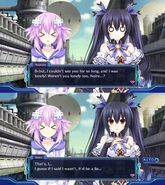 Noire was lonely without Neptune 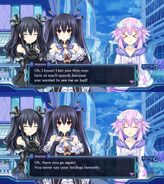 Add a photo to this gallery
Retrieved from "https://yuripedia.fandom.com/wiki/Noire?oldid=27892"
Community content is available under CC-BY-SA unless otherwise noted.