Portland is a character in the series Azur Lane. A heavy cruiser of the Eagle Union, Hull Number CA-33. Portland saw much action during WWII, being a part of the screening force at Coral Sea and Midway, bombarding shores during various amphibious invasions, and taking part in the surface combat at Surigao Strait. Her eventful career earned her 16 battle stars, causing her to be one of the most decorated ships of the WWII-era U.S. fleet. 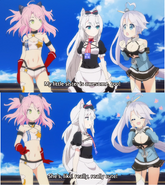 Add a photo to this gallery
Retrieved from "https://yuripedia.fandom.com/wiki/Portland?oldid=38646"
Community content is available under CC-BY-SA unless otherwise noted.