Raphiel Ainsworth Shiraha is a main character in the series Gabriel DropOut. In everyday life, Raphi is a normal by-the-book angel, both in Heaven and the human world, since she is a loving, kind, polite, friendly, and diligent girl. Though as soon as she arrived on the human world, her desire for something exciting builds up and she soon reveals her "dark" side. The second ranked angel in Gabriel's class, who came from an upper-class family, and has since become a sadistic stalker who takes delight in teasing Satanichia and causing chaos for entertainment. Her birthday is on March 19. 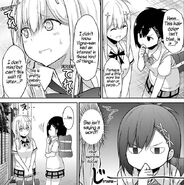