Red (Also stylised as 'RED') is a human character hailing from the Neptunia franchise series. As there are many different dimensions in the Neptunia series, there are multiple different Reds featured with similar personalities and interests. However, regardless of dimension, Red is always portrayed as a young and energetic tomboy with the life goal to amass a harem of girls for herself. 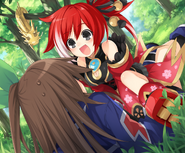 Add a photo to this gallery
Retrieved from "https://yuripedia.fandom.com/wiki/Red?oldid=27857"
Community content is available under CC-BY-SA unless otherwise noted.