Red Queen is one of the side characters in the series Restaurant to Another World. A female shape-shifting red dragon and one of the six ancient dragons in the other world. When visiting the restaurant - whose door opens right onto her mountain lair -, she adopts the form of a voluptuous, red-haired human woman, with large triangular horns sprouting from her head. Her favorite dish is beef stew. 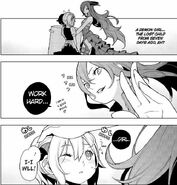 Add a photo to this gallery
Retrieved from "https://yuripedia.fandom.com/wiki/Red_Queen?oldid=32427"
Community content is available under CC-BY-SA unless otherwise noted.