Ren Isuzu Is a character in the video game Magia Record. She is a dark-aligned magical girl that (as of February 2020) does not appear in the main story but does have a side-story. 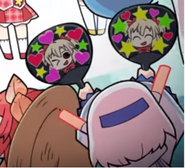 Add a photo to this gallery
Retrieved from "https://yuripedia.fandom.com/wiki/Ren_Isuzu?oldid=34259"
Community content is available under CC-BY-SA unless otherwise noted.