Reo Kawamura is a main character in the series Sono Hanabira ni Kuchizuke wo. An antisocial tsundere student at St.Michael's who is very aggressive (especially in the Reo and Mai diaries) and she will bite Mai if she does something to upset her. She loves to eat cake or any sort of sweets. Her birthday is 22 March. 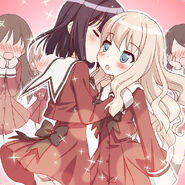 Add a photo to this gallery
Retrieved from "https://yuripedia.fandom.com/wiki/Reo_Kawamura?oldid=33560"
Community content is available under CC-BY-SA unless otherwise noted.