Rin is a playable character from the Senran Kagura video game series. She was a teacher at Hebijo Clandestine Girls' Academy. She is always cool, and her strength is top class. She is very severe and strict with her students, not believing in the word "mercy". Her hobbies include World Peace and Teaching. Her birthday is on September 30. Her favorite food is Beans. 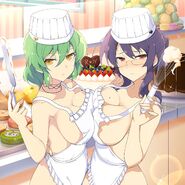 Add a photo to this gallery
Retrieved from "https://yuripedia.fandom.com/wiki/Rin_(Senran_Kagura)?oldid=32749"
Community content is available under CC-BY-SA unless otherwise noted.