Saki Amano is a supporting character in the yuri series Kanamemo. The assistant chief of Fuhshin Gazette, despite still being in elementary school. She is the only "serious" one of the group, and frequently reprimands the other girls when they neglect their duties. 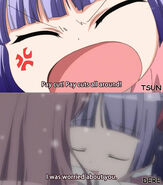 Add a photo to this gallery
Retrieved from "https://yuripedia.fandom.com/wiki/Saki_Amano?oldid=32476"
Community content is available under CC-BY-SA unless otherwise noted.