Sakuya Izayoi is a main character in the series Touhou Project. The Chief Maid who serves Remilia Scarlet, the head of the Scarlet Devil Mansion. She is the only human living in the Scarlet Devil Mansion. Her behaviour is that of an easy-going person and, although her personality can be seen as perfectly elegant, she possesses a little deviation that she is extra cautious about: inability to eat hot foods. She possesses the ability to manipulate time, where she's able to control the flow of time, such as speeding up time, slowing it down, erasing it, and stopping time altogether. She can also compress the flow of time to make both past and future to exist at the same time, making the same object from different timelines be in many places simultaneously. She possesses a great amount of silver throwing knives and is skilled at handling them, and with only her ability to manipulate time, she is skilled in conjuring knives from nowhere. Her power to control time distanced her from humans, and she eventually gave up trying to be friendly with them. 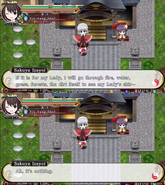 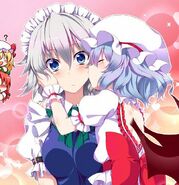