Sara Kitajima is a main character in the series Sono Hanabira ni Kuchizuke wo.

A student at St. Michael's and Kaede's younger cousin. A student model, well-known from fashion magazines. Her mother is an actress, making her a true thoroughbred. She has an incredibly bright and sociable disposition. Her birthday is 24 November. 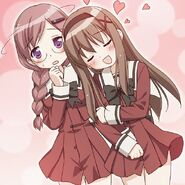 Add a photo to this gallery
Retrieved from "https://yuripedia.fandom.com/wiki/Sara_Kitajima?oldid=31562"
Community content is available under CC-BY-SA unless otherwise noted.