Seira Hitsuji is a main character in the series Lilycle Rainbow Stage!!!. A blunt, competitive, confident, hardworker, airhead, and outgoing Student Council Vice President. Her special skill is making a smile at work. Seira is the student council vice president, who is often seen as sociable and tries to act that way, though she's nervous around strangers. She doesn't want to accept that truth, however. She always sees Hare as her rival but losses to her in the slimmest of margins. She does, nonetheless, maintain her straightforwardness of saying what she wants. Seeing Hare flustered gives her a slight sense of superiority. Her birthday is on 23 March. 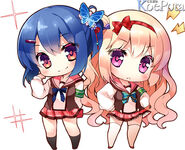