Shadow Gale is a main character in the series Mahou Shoujo Ikusei Keikaku. Shadow Gale is part of Team Pfle. She is Pfle's servant and most trusted friend. Shadow Gale's family has served Pfle's family for many generations. As a magical girl, she has a bird's tail with black feathers. Freedom and games are among the things she likes. Shadow Gale is generally a kindhearted and polite person to everyone and dislikes violence between people. Her magic allows her to increase the performance of machinery by modifying it. 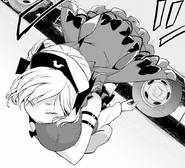 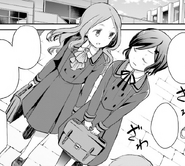 Add a photo to this gallery
Retrieved from "https://yuripedia.fandom.com/wiki/Shadow_Gale_/_Mamori_Totoyama?oldid=33696"
Community content is available under CC-BY-SA unless otherwise noted.