Sharo Kirima is one of the main characters of the manga and anime Gochuumon wa Usagi Desu ka?. Sharo is a sensitive and bashful girl who has insecurities when it comes to her image. She is easily flustered and worries that her friends think she is a rich and sophisticated lady when in actuality she is a regular girl living in a humble home. She is quite jumpy and easily frightened; for example when her friends tell ghost stories she covers her ears because she doesn't want to hear them, and one time she could not walk home from school because a small wild rabbit was standing in her path and she was scared that it would attack her. Sharo becomes very hyper and playful under the influence of caffeine. 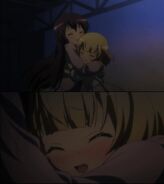 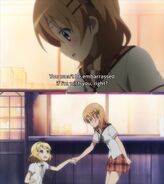 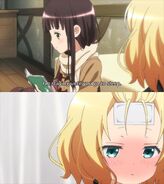 Add a photo to this gallery
Retrieved from "https://yuripedia.fandom.com/wiki/Sharo_Kirima?oldid=34175"
Community content is available under CC-BY-SA unless otherwise noted.