Shinka Nibutani is one of the main characters in the anime Love, Chunibyo & Other Delusions. She is Yuuta's classmate and class representative. One of the most popular girls in the class due to her looks, she is generally thought of a kind and gentle girl. When out of the public eye, Shinka shows her true nature to be bit more bitter and easily irritable, particularly when dealing with Dekomori. While Yuuta initially admired her or even had a crush on her, after seeing her true colors, he is disillusioned and becomes friends with Shinka instead. Despite her constant arguments and fights with Dekomori, Shinka really cares for her and vice versa. 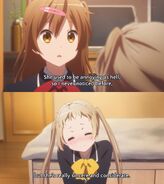 Add a photo to this gallery
Retrieved from "https://yuripedia.fandom.com/wiki/Shinka_Nibutani?oldid=34171"
Community content is available under CC-BY-SA unless otherwise noted.