Shinobu Ōmiya is one of the main characters on both the manga and anime Kiniro Mosaic. Shino is a graceful, optimistic girl who loves western culture. She previously stayed over at Alice's home in England, although she herself is rather bad at English and has generally bad grades. 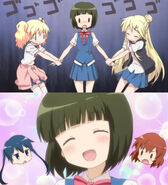 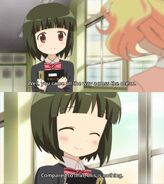 Add a photo to this gallery
Retrieved from "https://yuripedia.fandom.com/wiki/Shinobu_%C5%8Cmiya?oldid=32533"
Community content is available under CC-BY-SA unless otherwise noted.