Shinya Banba is one of the main characters of the manga and anime series Akuma no Riddle. She is quite more rude and violent personality than the actual Mahiru. Both are like two souls who share the same body thus both never appear at the same moment throughout the plot, yet both are able to communicate with each other to a certain degree. She is also a former student of the 10th year's Black Class at Myojo Academy. 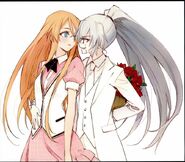 Add a photo to this gallery
Retrieved from "https://yuripedia.fandom.com/wiki/Shinya_Banba?oldid=32535"
Community content is available under CC-BY-SA unless otherwise noted.