Shione is a minor character in the series Croisée in a Foreign Labyrinth. The older sister of Yune. Compared to Yune who is always cheerful and curious, Shione is more delicate and timid. She lives in Nagasaki. 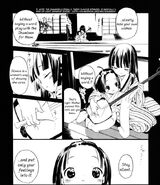 Add a photo to this gallery
Retrieved from "https://yuripedia.fandom.com/wiki/Shione?oldid=31553"
Community content is available under CC-BY-SA unless otherwise noted.