Shirabe Tsukuyomi is a major character from Senki Zesshō Symphogear series who first appears in the second season Symphogear G. Before joining Hibiki and her fellow Symphogear users she, Kirika, and Maria were part of a group that opposed Hibiki. 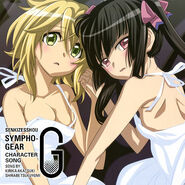 Add a photo to this gallery
Retrieved from "https://yuripedia.fandom.com/wiki/Shirabe_Tsukuyomi?oldid=32571"
Community content is available under CC-BY-SA unless otherwise noted.