Shizuku Kirishima is a main character in the series Sono Hanabira ni Kuchizuke wo. A third-year student and Japanese beauty who’s grown up at St. Michael’s, having attended since kindergarten. Her character is one of sincerity and excellence; however, she’s exceedingly bad with foreign words. Her birthday is 21 June. 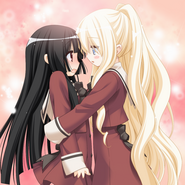 Add a photo to this gallery
Retrieved from "https://yuripedia.fandom.com/wiki/Shizuku_Kirishima?oldid=33720"
Community content is available under CC-BY-SA unless otherwise noted.