Sophie Neuenmuller is the protagonist of Atelier Sophie: The Alchemist of the Mysterious Book and a major character in Atelier Firis and Atelier Lydie & Suelle.

She is a budding alchemist who wants to help others like her grandmother. While writing a recipe down one day she ends up bringing Plachta to life, whereupon Platcha decides to become her alchemy teacher. 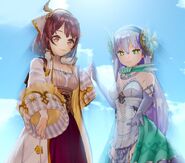 Add a photo to this gallery
Retrieved from "https://yuripedia.fandom.com/wiki/Sophie_Neuenmuller?oldid=33750"
Community content is available under CC-BY-SA unless otherwise noted.