Sumika Izumino is a main character in the series Yurikuma Arashi.

Kureha's classmate who's shy and delicate. Later, she appears before Kureha as Lady Kumaria to turn Kureha into a bear and send Kureha and Ginko on a journey beyond severance. 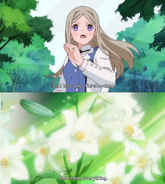 Add a photo to this gallery
Retrieved from "https://yuripedia.fandom.com/wiki/Sumika_Izumino?oldid=35344"
Community content is available under CC-BY-SA unless otherwise noted.