Sumika Murasame is a main protagonist in the yuri series Sasameki Koto. An intelligent, tall with long black hair and athletically gifted. Her family runs a karate dojo, so she has practiced martial arts since she was little, quickly becoming very strong, even being considered a karate "genius". 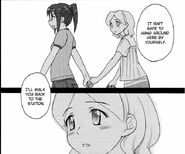 Add a photo to this gallery
Retrieved from "https://yuripedia.fandom.com/wiki/Sumika_Murasame?oldid=33784"
Community content is available under CC-BY-SA unless otherwise noted.