Tapris Sugarbell Chisaki is a supporting character in the series Gabriel DropOut. An innocent, naive, pure-hearted and emotional underclassman angel who admired Gabriel in angel school. Her birthday is June 4.

1.Highly obsessive towards Gab Jealous to Satania having photo of Gab undressing and wearing Maid costume. 2.Immediately showed desire to see Gab's photo when Satania offered her. 3.Typical Yandere relationship: a Kohai (junior) who admires a Senpai (senior) too much. Her Yandere however is not as typical as other Yanderes do as she is: 1.Not shy or afraid to talk to her Senpai (Gab). 2.Not showing murderous intent towards Satania for showing Gab's photo (although she does extremely jealous). 3.Capable of scolding and telling Gab if she did something wrong. 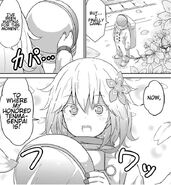 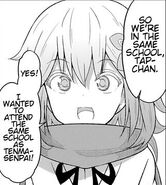 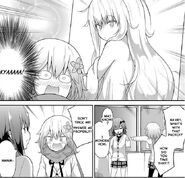 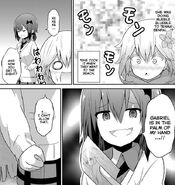 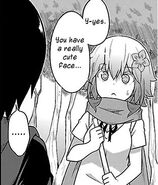 Add a photo to this gallery
Retrieved from "https://yuripedia.fandom.com/wiki/Tapris_Sugarbell_Chisaki?oldid=34389"
Community content is available under CC-BY-SA unless otherwise noted.