Tomoyo Daidōji is a supporting character in the non-yuri series Cardcaptor Sakura. The daughter of the president of Daidouji Toy Company, watched over by a team of female bodyguards, A refined and gentle girl. 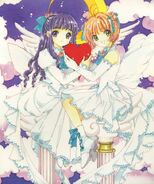 Add a photo to this gallery
Retrieved from "https://yuripedia.fandom.com/wiki/Tomoyo_Daid%C5%8Dji?oldid=32136"
Community content is available under CC-BY-SA unless otherwise noted.