Tsukasa Ōtomo is a main character in the story Pops in the yuri manga Yuri Shimai. An energetic and clumsy high school student, she broke her leg before she was admitted to school. She's the Secretary of the Student Council. 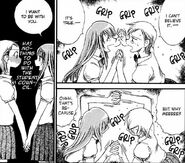 Add a photo to this gallery
Retrieved from "https://yuripedia.fandom.com/wiki/Tsukasa_%C5%8Ctomo?oldid=33901"
Community content is available under CC-BY-SA unless otherwise noted.