Tsuzura Hanatemari is a deuteragonist in the spin-off series Kakegurui Twin. She comes from very wealthy family and knew Mary Saotome ever since elementary school. A very friendly and polite girl. In spite of that, Mary Saotome never liked Tsuzura as Mary was envious of Tsuzura's wealthy background. Although she's usually cheerful and optimistic, is very clear that her housepet rank changed her personality, as she became shy and somewhat timid. Even though she is very rich and could free herself, she has low confidence and is certain that she would soon become a housepet again. Hanatemari (花手毬) means Flower Bud in english, likely referencing her hairpin. 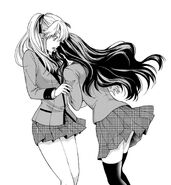 Add a photo to this gallery
Retrieved from "https://yuripedia.fandom.com/wiki/Tsuzura_Hanatemari?oldid=33909"
Community content is available under CC-BY-SA unless otherwise noted.