Yaya Nanto is a secondary character from the yuri series Strawberry Panic!. She is Hikari Konohana's roommate who has a rebellious side, sometimes going against school rules or what is normally accepted. She tends to be very outspoken and loves to tease people. 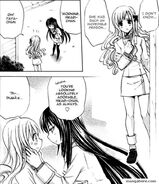 Add a photo to this gallery
Retrieved from "https://yuripedia.fandom.com/wiki/Yaya_Nanto?oldid=33973"
Community content is available under CC-BY-SA unless otherwise noted.