You Watanabe is the character in Love Live! Sunshine!!. She is a member of the Aqours. She is the childhood friend of both Chika Takami and Kanan Matsuura. 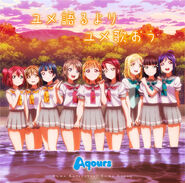 Add a photo to this gallery
Retrieved from "https://yuripedia.fandom.com/wiki/You_Watanabe?oldid=39845"
Community content is available under CC-BY-SA unless otherwise noted.