Yuki Miyazaki is the protagonist of the story Love Me Softly of Yuri Hime Collection. A clumsy, timid and imaginative girl who's in love with the class representative Miu Takachiho. She's got a mole on the back of her neck. 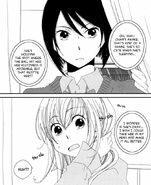 Add a photo to this gallery
Retrieved from "https://yuripedia.fandom.com/wiki/Yuki_Miyazaki?oldid=34019"
Community content is available under CC-BY-SA unless otherwise noted.